END_OF_DOCUMENT_TOKEN_TO_BE_REPLACED

Check out my Current Quote! What do you think about that? June 19th, 2016Margot
Sticky Post By Margot Permalink

As promised, here is a link to the incredible exclusive interview with John Perkins, author of Confessions of an Economic Hitman. It was recorded in Costa Rica earlier this year. His positive vision of having the people take back their economy by being conscientious consumers gave me great hope.

At the Byron Bay Sex and Superconsciousness Conference launched by ISTA (International School of Temple Arts), founded by a man named ‘BabaDez”) and organized by Eve Glimma, I had a breakthrough.

I walked on stage to deliver my keynote speech dressed in the most colorful psychedelic, sexy outrageous outfit I ever wore in the course of my long career. I told the audience that I was grateful for this opportunity to be so daring.

I realized that for all this time, I had wanted to raise public awareness in the West, about  “Tantra” . I wanted Tantra “to be taken seriously” as a legitimate and important science of spiritual development – one of the rare ones that incorporated sexuality as a path to spirituality. And I had always worn elegant, conservative and formal  costumes at public conferences.

But now, in Byron Bay, I did not care. Because I was surrounded by joyful, sex positive, people who loved their bodies and felt comfortable wearing sexy and daring outfits.

The conference unfolded in a fun and flowing way.Thanks to Colin and Eve and to all of you people out there who have ever been willing to break out of the box. You all gave me a lift!

Imagine being in an incredible natural paradise with pure natural, virgin beaches inhabited by all species of birds and animals, forest jungles teaming with Costa Rican wild life, and studying your favorite topics with world masters !!!

I personally LOVE BlueSpiritCostaRica, the Omega Costa Rica retreat center in Nosara, below the Nicoya peninsula. I have watched it grow from ground zero to a most exquisite seminar center…

I am going to teach concurrently with John Perkins, one of my heroes. You will enliven your body, awaken the luminescence of your brain, help mother earth, have the most fascinating conversation with people dedicated to global and personal  awakening…. Come join me there! Omega Institute

Margot Anand  SkyDancing Tantra & Beyond : A Vision Toward Global  Awakening Tantra teaches us to transmute sexual delight into spiritual ecstasy.  Since our bodies are both of love and of the planet, our personal awakening is    linked to planetary awakening. This week, Margot Anand, author of the best-  seller The Art of Sexual Ecstasy, takes us on a journey to cultivate global  awakening, beginning with ourselves. We go on inner journeys of purification,  clarify our goals regarding love and sexual delight, and develop our inner light  using guided meditations, visualizations, breath, movement, dialogue, and       sensual inquiry. Week 3.

I am so pleased to share my latest interview on webtalkradio.net on the Sex and Happiness show. Laurie Handlers calls me ”The Great Mother of Tantra,” hmm I like that:

“At last Margot Anand, all time “Mother of Tantra.” author of numerous books (classic: The Art of Sexual Ecstasy), creator of Sky Dancing Tantra comes out of seclusion to discuss not only the great wisdom understanding she has of the principles behind this ancient science, but she freely expresses her views on the politics of sex within the Tantra community and the world at large. Articulate as ever, Margot shares her beginnings with Osho and how she risked teaching in a time when it was all new to even talk about sex anywhere other than the bedroom.”

“I would like to be able to motivate you to really go into the study of Tantra without any prejudice because ecstasy means standing outside of yourself… and that means being willing to jump into the unknown and jump into the infinite…. There’s nothing better you can do.”

I have returned from my adventure at Blue Spirit. The area around NOsar was absolutely lovely. Immense coast line of great pristine, untouched beaches, no garbage anywhere, the environment totally protected.

Blue Spirit was a dream ! All the most elegant and modern amenities, an extraordinary group room for workshops, with pristine wooden floors and glass walls overlooking the coast and the magnificent ocean.

The food– vegetarian and sensational beyond delicious with “cleanse” menus, and all raw menu options available.

The people– were loving the options to dance, do yoga, meditate do ChiGung, or study Tantra with me, or Shamanism with John Perkins.

We let the New Year in with ritual and community. These photos show us doing a sacred fire ceremony on the beach to let go of the old energies and call in the light and protection for 2012 and beyond.

I hope I get to tell you in person about this unforgettable adventure in Costa Rica. Now onward to Byron Bay for the Sex and Consciousness Conference.

An article about my recent series of free talks at Villa Gaia in Ubud, Bali. Enjoy! Margot

END_OF_DOCUMENT_TOKEN_TO_BE_REPLACED

Today, a most wonderful adventure happened. I met a 10 year old genius, Mael,  and his parents. The father is Thierry van der Weid. His wife, (and mother of the genius ) is Martine (French).

Thierry is Swiss and a graduate of the French/Swiss business school: HEC. He came with his family to Costa Rica and developed many businesses very successfully. Martine is lovely, joyful and free. She plays with their son, and looks after their home.

Mael, at 4 or 5 years,  started painting. His parents detected talent and immediately encouraged him by building him a painting studio, getting him the best colors and papers, and painting with him to keep him company; to allow him to trusthis talent.

Now, years later, his paintings are so free, so amazing, that his parents (2 years ago) decided to open an Art Gallery where he paints and exhibits his paintings. He has already sold hundreds of them to people who are building homes around here and in the USA. His parents’ real estate offices bought some to decorate the new homes they were selling.

Mael, at 10, had already earned and saved $ 20.000 from his paintings. He went on a holiday with his parents and discovered mini-golf. He became passionate about mini golf. He decided to build one where he lives, right in his back yard, on some land his parents own around their restaurant : Cafe de Paris. Right on Center street at the cross roads to the beach and to Nosara –the village itself.

So Mael went to San Jose, the capital of Costa Rica,  and met with an engineer who specializes in designing and building mini – golfs. Then Mael designed his own game spaces  along with holes and obstacle courses. And the engineer came down to Nosara, Cafe de Paris, and built this Mini Golf attraction designed by Mael.

Mael had calculated the income that might eventually refund his expenses would double in 6 months. He made twice as much as he had foreseen. He noticed that in the afternoons, when the sun is too hot, parents came with their young kids. Because the mini golf is situated in a jungle like environment with many shady trees.

And in the evening ,  young adolescents came in groups of 5 or 7, hanging out, drinking coca cola, playing Mini Golf, laughing and having a great time. The entrance fee is between $5 and $10 depending on your age.

Meanwhile, Mael goes to the local Montesori School where his creativity is encouraged. And he continues to produce paintings, and now has begun sculpting. He is wise beyond his years and his mother says that whenever she is unsure about something and doesn’t know what to do, Mael comes up with a wise answer that helps her. Clearly, his parents are in love with their son and respect him deeply. During School holidays, they go travelling and visit different countries every year, so Mael gets to know the world. I had lunch with the three of them We asked Mael “are you happy ?” “yes” he answered. And : “is there anything you would change in your life ?”  “No” he answered, “it is perfect as it is, absolutely perfect .”

Can you imagine ????? And they all say : »this could only happen so gracefully because we are in Costa Rica »…. A Kudo for this country. HOW ABOUT THAT !!! Is that cool or what ??? 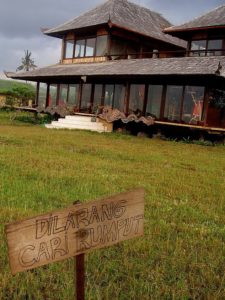 It is while on travel that home is missed most–home for me being a beautiful one-of-a-kind creation, just recently completed, that lies on the East Coast of Bali in between the waves and Bali’s highest peak: the towering Mount Agung.

To be involved with this architectural opus from conception to completion brought me great joy, as well as a number of challenges. But the bond between my living space and I has never been more sacred and intimate. My home contains Balinese guardians, Javanese carvings, a space for me to paint, a unique self-designed statue of Goddess Lakshmi, a 180′ view of the sea, 2 gorgeous Persian cats, sacred artifacts blessed by monks, and much more. This is how a friend described his first visit:

When I entered the space, I felt a release from my body. In every direction I felt a sense of mystery and freshness of energy that was overwhelming. As I scanned the 180 degree view of the ocean, I experienced a convergence of the elements; a blissful connection to the power of nature. And then my eyes greeted the extraordinary Lakshmi sculpture standing directly in the center of view. I felt an immediate urge to send praise and thanks for this outstanding temple of life force and creative inspiration.  I had never wanted to dance to the sensation of wave and wind so much.